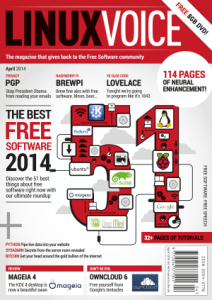 The countdown begins! There are just 10 days to go until Linux Voice issue 1 is released. If you’re a subscriber from issue 1 onwards (ie you bought your subscription before the 16th of February), you’ll get an email on the 27th of February telling you how to download your issue. If you bought a print subscription, you should get your copy early next week (UK subscribers) or a bit later if you’re overseas, with the time depending on your distance from the UK.

If you want to buy Linux Voice on the newsstands, you’ll be able to find it on the 27th in these shops in the British Isles:

…along with many independent newsagents. If you’re overseas, we’re shipping copies to newsagents in Australia, Belgium, Brazil, Canada, Finland, Hong Kong, Malaysia, New Zealand, Portugal, Singapore, Spain and Sweden. (No USA at the moment unfortunately, but we’re working on that for issue 2.)

Don’t miss it: help to fund the future of Free Software and join us on this awesome journey from the start!