Andrew Gregory dips his toe into the ocean of robotics and GPIO programming with this cheap and cheerful beginner’s kit. 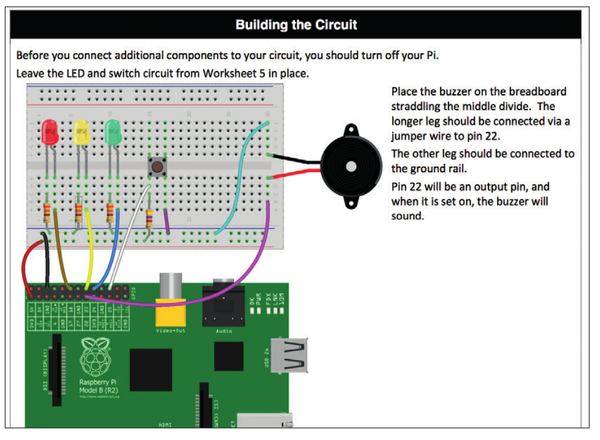 The documentation is fantastic – everything is clear, even if you haven’t played with electronics before.

When the Raspberry Pi launched in 2012 it was clear that it would rise or fall on the strength of the supporting material. And so it has proved; there are more powerful and cheaper devices out there, but the Pi has grown a huge community providing how-tos and projects, and several third-parties have popped up selling add-on equipment.

One of these is the CamJam EduKit. A collaboration between Michael Horne and Tim Richardson of Cambridge Raspberry Jam in partnership with The Pi Hut. The CamJam EduKit is a cheap (£5.00) box of components and a complementary set of worksheets downloadable from camjam.me/edukit.

The components in the box comprise a breadboard, three LEDs, some jump leads, a handful of resistors, a buzzer and a switch. Using these elements, you can make a simple circuit powered by the GPIO pins on the Raspberry Pi, gradually adding more functions until you’ve got a little device that responds to input from the command line and from the included switch. And that’s it. At the time of writing, there are six worksheets, which start with the very basics and move up to importing Python modules and accepting input from the user.

From the ground up

When we say that the EduKit starts with the basics, we mean the absolute basics. The first worksheet describes the process of plugging in the Pi, booting it and writing a Hello World script in Python. This assumes a Raspbian installation, but we used our brand new B+ with the Noobs kit. This is no big deal, as Noobs clearly identifies Raspbian as the recommended choice of OS.

Another consequence of using a B+, rather than the model B that the worksheets were written for, is that the B+ has an extra 14 GPIO pins. This could be enough to confuse an absolute beginner, but a quick Google search reveals that the first 26 pins are laid out in exactly the same configuration as they always were, so any old guides are going to be compatible with the new Pi. Actually, forget that: while we were writing this review, Michael Horne updated the (excellent) documentation to include a reference to the model B+.

For our money, the EduKit is an unqualified success. There are no moving parts; you won’t be building a robot out of an ice cream tub with this kit, or anything more advanced than a traffic light system, but that’s not the point. What it does do is open up the door, just a crack, into the possibility that you might build these things in the future, and that’s what makes it brilliant.

Like the Pi itself, it’s cheap enough to be a stocking filler for a curious child, and if they don’t like it, you’ve only wasted a few quid. But if it takes root and fires something in your imagination, that £5 becomes the best value possible. If you want to have a go at robotics but don’t know where to start, the answer just got a lot simpler: start here.

A perfect introduction into the complicated world of electronics tinkering. Our appetite is whetted.