Make your Python programs work with the Linux shell to build your own command line utilities.

If you’ve used the Linux command line for more than the most basic uses, you’ll be familiar with the concepts of standard in (stdin) and standard out (sdtout). These are channels the shell pushes data through when you link commands with the pipe character (|). For example :

Here, the first command (dmesg) sends the kernel message buffer to stdout. The | symbol takes the stdout of one command and pushes it into the stdin of the next. The grep command then goes through each line in its stdin and prints out only those containing the string ‘USB’. Using this concept of stdin and stdout, we’ve managed to build a simple little tool for checking the kernel messages about USB devices.

In the Unix philosophy, as much as possible, programs should be simple commands that work with stdin and stdout. If they do, then they can be combined with the other Unix commands in a huge number of ways. Working this way means you can focus your program on doing one thing well. Rather than having to program every possible feature, you just focus on the core of the program and the user can use other Unix tools to gain more features by chaining commands together.

Let’s take a look at how we could start building our own implementations of standard Unix tools in Python that interact using stdin and stdout so they can be chained together.

Let’s start with cat. This stands for catenate. Basically, it’s used to send the output of one or more files to stdout. In Python, this is really easy:

All we have to do to send something to stdout in Python is print it. Here we’ve used the print function, which is the standard way of doing it in Python 3. This also works in Python 2 if you include the first import line. The reason we’ve done it this way is because we’ll use some features of the print function a little later on, and want to keep things consistent. 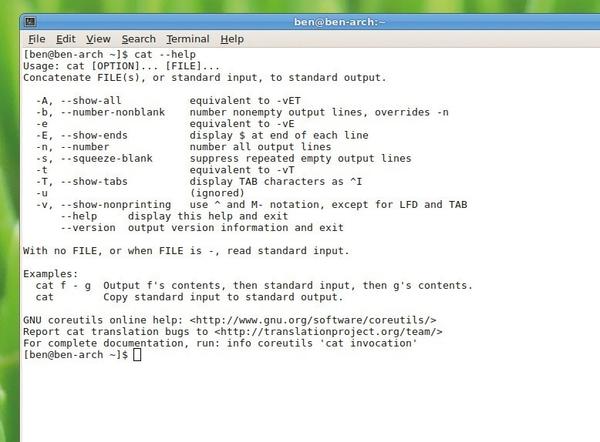 GNU’s cat utility has many more features than we’ve
implemented here, but it still works on the same basis of
reading files and sending their contents to stdout.

We can get the arguments to the command from sys.argv. This is simply a list of everything that’s supplied to the Linux Shell (see “Arguments” box). Here, we just use this to loop through every argument to the command and hope it’s a file. So, the following would send the output of file1 and file2 to stdout:

You can chain this with other Unix commands such as wc (word count) like this:

wc outputs the number of lines, words and characters in a file. Let’s implement that next:

As you can see, getting input from stdin is quite straightforward. It’s read in in lines just like files are.

These two tools can be linked together with:

So far, we haven’t implemented any error checking. So, if you try to cat a file that doesn’t exist, you get a Python exception:

This might seem a little strange, because the error from the first Python command hasn’t been sent to stdin of the second command. Instead it’s been displayed on the screen. The reason for this is that errors don’t go to stdout: instead, there’s a separate channel for them called standard error (stderr). This means that a program can send error messages without corrupting the information going to stdout. For example, you might have used cat.py to output the contents of several files, but one of them doesn’t exist. Using stderr, you still send the output of all the files to the next command in the chain, but also alert the user to the problem. Let’s take a look at how to modify our cat command to deal with this:

As you can see, all you have to do to print something to stderr is include the parameter file=sys.stderr in the print function, and you can print to it just like you print to stdout.

Stderr doesn’t have to be printed on the screen though; you can send it to a file instead. If you’re running commands through some automated means such as at or cron, it can be useful to collect any errors. This is done with:

Anything a command sends to stdout, will be printed on the screen (you could also pipe it into further commands). Another option is to tell Bash to send stderr to stdout. Doing this will combine stdout and stderr into a single flow of text and pass it along to any future commands: 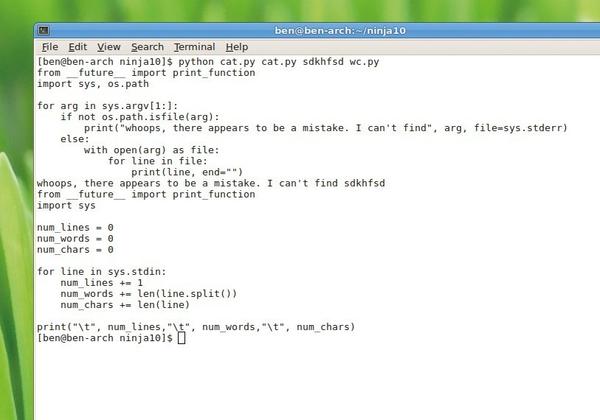 Even if one of the arguments to our cat program isn’t a
file, it will still handle the rest correctly.

Interacting nicely with the Linux command line environment isn’t all about using stdin, stdout and stderr. Another aspect of the command line environment is properly parsing arguments and flags. For example, in the cat Python script, we take a list of files as arguments. We did this using sys.argv. This provides a list of everything that’s passed to the command (the first item in the list is the command itself; in that example, we only included everything from the second element onwards).

However, if your command takes a range of options, it can be quite complex to correctly parse this. Fortunately, there’s a module to help: argparse. Let’s take a look at a simple example. This will be a command a little like echo, but it will send the output to stdout unless the –stderr flag is present, in which case it will send it to stderr (this is just an example, and the normal echo command doesn’t have these flags).

We’ll do this using the argparser module (new in Python 2.7, so this won’t work if you’re using an older version). Using this, you only have to specify what options you have, and the module will take care of parsing them and putting them in variables so you can access them:

You can now check it’s working with the following lines:

The argparser module even takes care of creating your help text (from the description and help parameters used when creating the parser), so you can run:

You can fine tune argparser’s operation to almost any degree, and it has excellent documentation at: https://docs.python.org/2/howto/argparse.html.