All* good programmers make sure their software works properly before releasing it to the world.

In issue 7’s Code Ninja, we had a piece of code that was supposed to output the Roman numerals for a particular number. As some of you noticed, it did not quite work as it should have. This month we’ll take a look at what we should have done to save ourselves the embarrassment of publishing code that doesn’t work properly: testing.

The simplest form of testing (and the one that would have saved us two issues ago) is unit testing. This is where you check a particular block of code (typically a function or method) and ensure it’s working correctly. Just to recap, our code from the previous tutorial was:

This isn’t particularly conducive to testing, because the same function that calculates the value also outputs it. In other words, there’s nowhere to catch and test the value of the Roman numeral before it’s sent to the terminal.

The first thing we need to do then, is re-factor the code so that the function returns the text for the Roman numeral rather than printing it. The function then becomes:

This also removes the spaces from between the symbols, so we’ll remove them in the symbols list of tuples as well.

Now you can capture what Roman numerals the code is producing, and so you can now automate testing of them.

There is a school of thought on software development that says that the first thing you should do when embarking on a new project is write a test. In this paradigm (known as test-driven development or TDD), the tests aren’t just a way to find bugs, but form the specification for the program itself.

The process follows these steps:

The software then evolves as new tests are added to specify new behaviour. The software is always fully tested because new features are only added after there is a test to define the behaviour, and since the tests are all run in each iteration, there shouldn’t be any regressions. 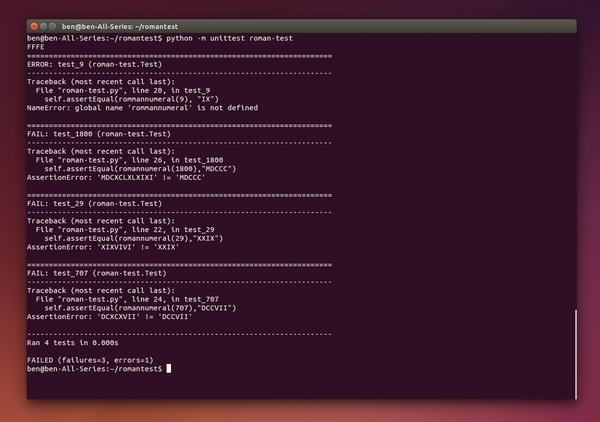 If only we’d run this two months ago, we could have spared ourselves some embarrassment.

Testing libraries help you manage individual test cases and run them appropriately. The most popular such module for Python is PyUnittest. This is usually included with Python, so you shouldn’t have to go hunting around for anything.

With a few test cases added, the code becomes:

You’ll need to add the symbols list (with the spaces removed), and the romannumerals() function from the previous code (they’re omitted here to save space). We’ve called this file roman-test.py.

The condition __name__ == ‘__main__’ is true when the code is being run from the command line, so this allows us to still run it normally with python roman-test.py, but it means that the code works properly when imported into the test module.

The tests are all methods of a class that inherits from unittest.TestCase, and they all call one of the assert methods. Here we’ve used assertEqual() to check that the value returned from the romannumeral() function is the right value.

If you call the file containing the code roman-test.py, you can run the tests with:

Ah, it seems that three of the four tests fail. It turns out that there’s an error in our code that generates the Roman numerals. The continue statement should be a break statement. If you make this change, you should find that all the tests pass.

In this example, we’ve used assertEqual to check if a particular test passes or not, but there are many different methods you can use. Some of the most useful are assertTrue(statement), assertRaises(exception), assertIsInstance(object, class) and assertAlmostEqual(value1, value2).

You can get a full list from the documentation at https://docs.python.org/2/library/unittest.html.

The above test cases only check four numbers. It’s trivially easy to add more test cases (we kept it short to save space). In fact, in this case, it would be possible to set an upper bound (say, 1000), and enter the correct data for every possible number. This way we could ensure that it was definitely producing the correct output. This is known as exhaustive testing.

However, if the software had a wider range of inputs, then it may not be practical to run an exhaustive test. In this case, we’d have to be selective in which values we test. We want to pick the values that are most likely to lead to an error.

There aren’t any hard-and-fast rules about this, but there are a few guidelines that can help you. You want broad coverage. That means that you don’t want to cluster all your tests in one area. You also want to check areas where the output flips from one case to the next (eg 8 and 9 which go from VIII to IX). Edge and corner cases can also be fertile sources of errors. This is where you push one or more parameters to their maximum values.

If you create a good suite of tests when developing a particular part of a piece of software, then you can use these tests to ensure that you don’t accidentally introduce a bug (or regression) into this area as you add features, or fix other bugs. This is known as regression testing, and as software becomes more complex, it become more important. 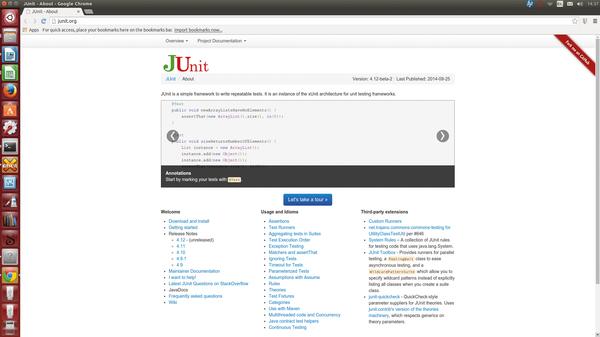 Java’s JUnit is probably the best known of the unit testing frameworks, but SUnit (written for the Smalltalk programming language) came first.

Other forms of testing

Here we’ve looked at unit testing. This is great for making sure that a particular part of your program is working properly, but in complex software, this can still miss bugs.

Unit testing checks that each bit of code works correctly by itself. The next step is to make sure that all the bits of code work properly when combined together. This is known as integration testing.

Most programs aren’t isolated bits of code, but part of a larger ecosystem. For example, they might get some of their data from an external database, or send files to another server. Systems testing is where you test that the software works correctly with all the external services that it uses.

Bugs aren’t just bits of code that don’t work properly. They can also be things that don’t work as the user expects them, or confusing GUIs. Usability testing is where you put real users in front of the software and make sure it works as they expect it to.