The one social media system to bring them all, and in the openness, bind them.

It’s a source social network. From a user’s perspective, it’s quite similar to Facebook or Google+ in that you add people you want to be in contact with, then it brings all their updates into a stream for you to view. You can assign people to different groups depending on how you know them and tailor with whom you share information. You can follow hashtags, and posts that mention these hashtags get added to your activity stream.

I’ve checked the bottom of the page, and I can’t see any footnotes that reference that asterisk. Why do you keep using it?

The software’s called Diaspora*. The asterisk is part of the name, not a reference to a footnote. In fact, it’s silly, so let’s get rid of it.

Oh, OK. So Diaspora is a kind of a mashup of Facebook, Google+ and Twitter. Why on earth do I want another social network sucking up my free time?

The real advantage of Diaspora isn’t the software features though, it’s the philosophy behind it. Diaspora is open source and federated, so it’s not under the control of any one organisation.

Federation? What does that mean, and how does it benefit a social network?

Federation means that the network is open and anyone can create a new server. For example, anyone can set up a new email server. All you need is a computer connected to the internet with an externally route-able IP address. This means that no company can monopolise the medium, and no one can be banned. You can use whichever email provider best suits your needs, or run your own server if you want to keep control.

The same is true of Diaspora. The network is decentralised, and consists of a number of servers (known as pods) that connect to each other. Each pod can handle many users (depending on the hardware hosting it), so you don’t have to host your own; you can join a pre-existing pod.

The pods are independently operated, and anyone can set one up and connect it to the Diaspora network. Pods can be private to a particular group, or open and allow anyone to join.

So, since it’s open source and federated, does that mean Diaspora is more secure than commercial social networks?

That depends on how you set it up. Whenever you upload something to a website – any website – you’re giving up control of that data. Whether it’s a 140-character tweet that you want to share with the world, or a picture that you only want your Facebook friends to see.

All social networks specify with whom they will share the data, but it’s up to them to make sure they follow these rules. There’s no technical reason to stop Facebook sharing all your private data with the world. This is also the case with Diaspora. When you upload data, it’s stored on the pod, and you have to trust the pod’s admins to respect the terms under which you uploaded it. What’s more, if you share it with a member on another pod, the data will be transmitted to that pod, so you’ll have to trust that pod’s administrators as well.

The thing that makes Diaspora different is that you choose what pod you use. If you’re worried about security, you can set up your own pod, and invite people to join you on it. Then, anything that you only share with people on your pod will only be shared with that group. There won’t be any other admins that could poke around in your data.

Are you saying that unless I run my own pod, Diaspora is not necessarily any more secure than the commercial networks?

To a certain extent, the answer to that question depends on from whom you wish to keep your data secure. If you wish to keep it more secure from rogue sysadmins or hackers, then there’s a risk with any social network. On the other hand, if you want to keep your data away from advertisers who are trying to build a profile of you, then there’s a slight risk that a malicious Diaspora pod may do this, but we know that Google and Facebook do this – after all, they’re both advertising companies that run social networks to get more people to look at their adverts.

What’s more, since Diaspora is run by the community, the security decisions taken are the ones in the best interests of the community, not what’s in the best interests of the advertising company running the website. This means that we don’t expect to see sudden changes to privacy settings that lead to once-private data being shared with the world. You can also download all of the information Diaspora holds about you, or delete it at any time. 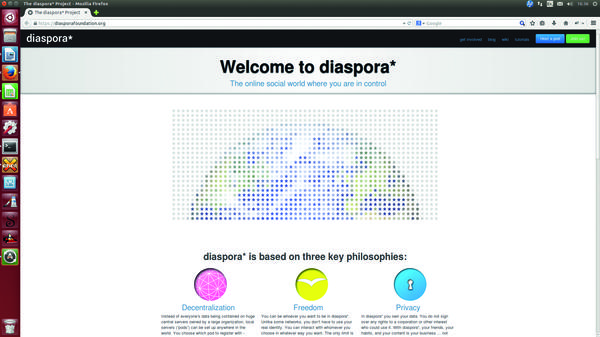 You can find out more about the project at https://diasporafoundation.org, but this isn’t a pod, so to join the network, you’ll need to head to http://podupti.me to find one.

If it’s all open source, who’s running it?

The project was started by a group of four students (Dan Grippi, Maxwell Salzberg, Raphael Sofaer and Ilya Zhitomirskiy) at Courant Institute of Mathematical Sciences in New York, and they turned to Kickstarter to crowdfund the development. On 24 April 2010, they launched a campaign aiming to raise $10,000, they received just over 20 times that much, making it the most successful Kickstarter project at that point. The first pod (an invitation-only alpha) went live on 23 November 2010. However, before the software reached a stable state, tragedy struck and Ilya Zhitomirskiy killed himself.

Two years after receiving the funding – with the software still in beta – the main developers shifted their focus to a new project, and announced that they’d let the community take ownership of the project. The project is now run under the umbrella of the Free Software Support Network.

Of course, this is just the development of the software. Because of the federation, the actual hosting of the pods is done by other organisations and individuals around the world.

Wow, it sounds like there’s no downside. Should I close down all my other social media accounts and switch to Diaspora?

There is a sort of chicken-and-egg problem with new social networks. No one wants to join until there are enough of their friends on to make it worth while. At the moment, the Diaspora community is tiny in comparison to the big social networks, and so it’s unlikely that you’re going to be able to connect with all your old school friends.

There is a slight mitigation for this in the way Diaspora can link to the other networks. That means that you can push your posts from Diaspora to Facebook, Twitter, Tumblr and WordPress. However, this doesn’t solve the problem, as you still have to log into these services to interact with them.

The federated nature of Dispora also means that there is no one in overall control of the network. For the most part, this is a good thing. However, there are cases when this means that there is no one there to enforce good policies. For example, IS (the organisation formerly known as ISIS) has been banned from Facebook and Twitter, and has now moved to Diaspora. Since no one is in overall charge of the network, it becomes the responsibility of individual podmins to remove the accounts of people sending messages of hate or using the network to organise malicious activity. The core team have worked with podmins to remove inappropriate accounts, and the situation is ongoing at the time of writing.

There’s a list of existing pods at http://podupti.me. You can only join ones that have open signups. It’s also a good idea to look for a pod with high uptime, and a recent software version. Hashtags aren’t federated, so you’ll only receive the public posts for the pod that you’re a member of (you can get posts from friends on any pod). So, it’s a good idea to join a pod with a large community in an area of interest to you. This could be people from a particular locality, or who follow a particular technology.

Alternatively, you could set up your own pod. To do this, you’ll need a computer with an IP address that’s routeable from the internet, and ideally you should have an SSL certificate (not self-signed). Once this is set up, you can follow the install guide at https://wiki.diasporafoundation.org/Installation.