Linux does a wonderful job of insulating your computer from the electronic nasties floating about. But it all comes to naught if you leave it on a bus or lose it in a robbery. The open source Prey software helps recover your stolen devices by allowing you to track and control them remotely and make them unusable to anyone who’s got them.

Remember, however, that to take advantage of Prey’s abilities you’ll need to install it before losing control of the laptop. Prey installs an agent on your device that runs in the background and periodically sends an HTTP request to check in with its online headquarters on whether it should perform any action or stay asleep. When you lose a device, you mark it as such on Prey’s dashboard and the device then starts collecting information to help you track it down.

Besides Linux, Prey works on several operating systems including Windows, Mac OS X, and even Android and iOS, so you can use it to track laptops and mobile devices as well. You can use it for free to track up to three devices or upgrade to a paid Pro plan starting from $5/month (about £3). 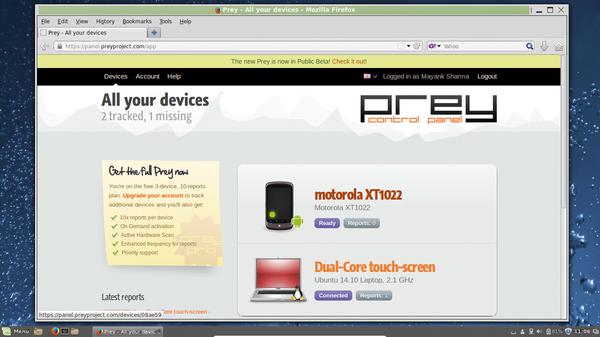 To prevent the thief from formatting your laptop, disable
booting from removable devices and also lock the BIOS.

Set up a device

The Prey project has pre-compiled binaries for Deb-based distros such as Debian and Ubuntu. To set up Prey on these distro, head to preyproject.com and click on the ‘Download now’ button to grab the binary. You can double-click on the downloaded .deb file or use the sudo dpkg –install prey-* command to install the Prey agent.

After it installs, Prey will fire up its graphical configuration tool and asks you to set up a reporting method. The reporting method controls how Prey communicates with the devices and reports back to you. The recommended method is to use Prey’s web-based control panel, which can be accessed from any machine. You can also optionally run Prey in standalone mode, which would require you to set up your own SMTP mail server whose settings you need to specify in prey’s config file under /usr/share/prey.

Next you need to register with the service. You can do so from within the app or by visiting preyproject.com. The Prey setup asks you for your name, email address, and a password. After the account has been set up, Prey will ask you to add the laptop to the list of tracked devices. It’ll automatically pick up the name of the device and its type, which you can edit later from Prey’s control panel. For subsequent installations on other devices, select the option to link the device with your existing account.

That’s it. You are now ready to set up Prey’s behaviour. If it isn’t already running, launch the Prey Configurator (which should be under the Administration applications menu), and switch to the Main settings tab. Here you can enable a password-less guest user account to lure whoever is using your stolen device. You should also opt to activate the Wi-Fi autoconnect option, which discreetly connects to the nearest open Wi-Fi hotspot and starts sending you reports. 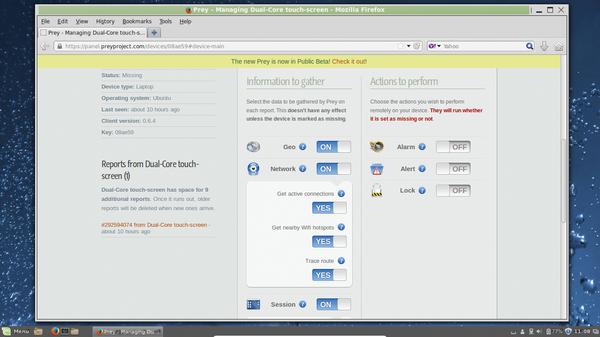 The best thing about the web-based control panel is that it allows you to configure the behaviour of Prey on the stolen machine even after it’s been pilfered.

After you’ve set up your device, you can configure its behaviour via Prey’s web-based control panel. The control panel is broken into various sections that control different aspects of the device.

The main dashboard lists all added devices. Click on a device’s name to set it up. Switch to the Configuration section, from where you can alter the name of the device as well as its type in case it wasn’t correctly detected. Then move to the Hardware section, which gives you detailed information about the hardware on a particular device including the serial number of the device as well as details about its motherboard and other components, which helps you submit a detailed report to the authorities.

The options under the Main section are separated into two groups; ‘Actions to perform’ lists the actions that Prey will take on your device. Although these actions will be performed irrespective of the device being marked as missing or not, it’s best to keep them turned off until the device is actually missing.

Some of these options are designed to dissuade the thief soon after you’ve lost the device. For example, the Alarm option sounds a loud alarm from your missing device to help you locate it, if it’s nearby. Then there’s the Alert option, which displays an alert message on the screen on the missing device. If these don’t work to discourage the thief, you can use the Lock option to prevent the computer from being used until a password is entered. However, you might not want to lock out the perp as you can trace him better when he’s using the laptop.

Keep tabs on your prey

When you lose the laptop, log into Prey’s web panel, click on the device that’s missing, and use the slider at the top to mark it as such. Prey can discreetly gather lots of information about the missing device and its current operator. You can mark all the information you wish to gather from the missing devices’ page on the web dashboard.

As soon as the device is brought online, Prey can use nearby Wi-Fi access points to interpolate the location on your device and mark it on Google maps. Along with this it also gathers other network-related information such as the public and remote IP address of the network the device is connected to. You can also ask Prey to run a traceroute (to google.com) from the missing machine through the thief’s router. For this to work though make sure you install the traceroute package on the missing laptop before losing it.

You can also ask Prey to gather information about the desktop session – including a list of running apps along with a screenshot. Sooner or later you will get a screenshot of him logging into his account on a webmail or some other website. While you won’t get his password, you’ll be able to clearly see his unique username, using which you can contact him.

If your device has an inbuilt webcam (most laptops and netbooks these days do), Prey will also secretly take snapshots of whatever’s in front of the webcam. It won’t take long before you catch the crook in front of your stolen device. You can set the interval after which Prey wakes up and collects the information you have asked it to gather. In the free version, this duration can be between 10 minutes to 50 minutes.

The Pro version allows you to take this down to two minutes or, better still, create a persistent connection with the device. One of the benefits of the Pro version is the On Demand Mode, which brings you reports from a missing device in real-time. In this mode, any changes you make to the configuration of the missing device are triggered instantly if the device is online.

You’re all set. All you can do now is wait. As soon as the miscreant goes online with your laptop, the Prey client will alert the Prey web service. Although we hope you never lose your laptop, in case you do, you are now fully prepared to take on the perp who’s got it, and either force him to return your device or collect enough information to build a strong case for the authorities to take action on. Happy hunting.

Prey on an Android device

Besides netbooks, laptops, and desktops, Prey can also protect mobile devices. To install Prey on an Android device, download it from the Google Play Store. Besides Android, the app also runs on iOS and is available on Apple’s App Store as well. Once it’s installed, hook it to your account if you already have one, or create a new one, just like you do on the laptop version of Prey.

After associating it with your account, Prey prompts you to activate the Prey administrator by locking down the software with a password for extra security. Once activated, whoever’s got your device will first have to revoke the privileges provided by the administrator before they can uninstall the software from your phone.

The Prey for Android app has the Disable Power Menu option, which when enabled prevents your device from being turned off by disabling its power menu. Also the Prey dashboard for the Android device has an additional option. You can toggle the Hide switch, which will then hide the icon for the Prey app from the Home screen.

Mayank Sharma has been tinkering with Linux since the 90s and contributes to a variety of technical publications on both sides of the pond.