Voting on our profit donating scheme is underway – and if you haven’t had your say yet, turn to page 34 of issue 13 to find out how to participate! (You can buy issue 13 from our shop.) We’ve spent the last 12 months building up the magazine and getting into newsagents around the world, so we don’t have huge wads of cash to throw around, but we’ve got £3,000 to give to free software projects, foundations and communities.

Here’s how the voting works: there are two categories (distros/projects and software), and everyone has three votes in each of them. The first choice is worth three points, the second two points, and the third one point. The voting system will be running for a while, to give all Linux Voice readers around the world a chance to participate, but we thought we’d show the results so far. Here’s the project/distro category: 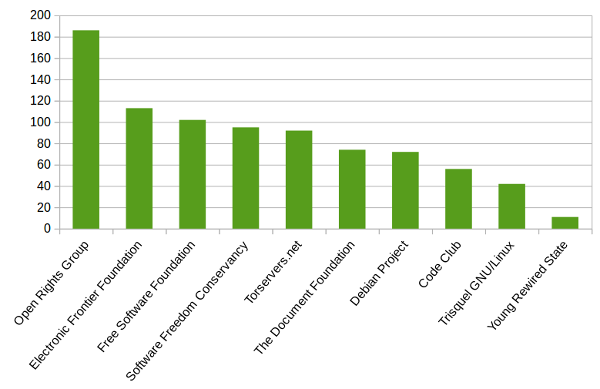 The UK-based Open Rights Group has an impressive lead. Many of our readers are based in the UK, and the Open Rights Group is making mass surveillance and digital rights a big issue in the upcoming general election, so it’s not surprising to see it doing strongly here. But there’s an intriguing battle for second place: the EFF, FSF and Software Freedom Conservancy are very close.

Meanwhile, here’s how the voting is looking in the software category: 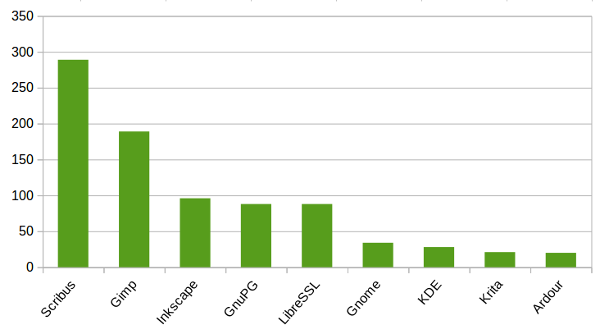 As expected, Scribus is leading the pack, with Gimp in a solid second place. But there are three potential third place winners – Inkscape, GnuPG and LibreSSL – so anything could happen here.

Once everyone has been able to vote, we’ll announce the winners. First place in each category gets £1,000, second place £300, and third place £200. As readers in more countries get involved, the shape of these graphs could change significantly! So don’t miss out – make sure you get your votes registered.

(Oh, and to the person who submitted 19,000 votes for LibreSSL from the same IP address: we’re happy that you’re so passionate about that project, but your attempt to game the poll was a bit easy to spot!)